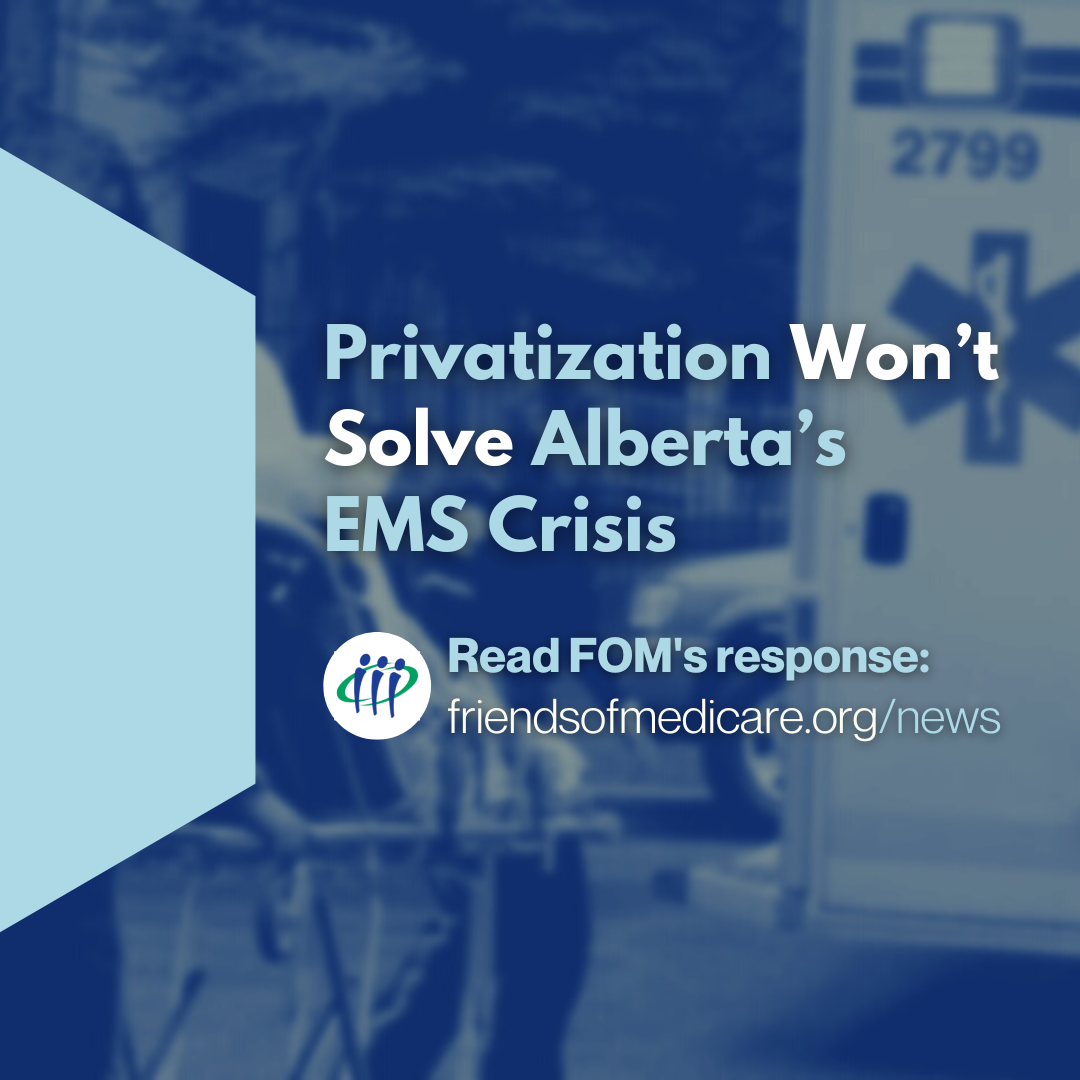 This morning Health Minister Jason Copping provided an update of their government’s plans for Emergency Medical Services (EMS), including privatization of inter-facility transfers.

EDMONTON — A year ago, Friends of Medicare warned that the government’s appointment of an EMS advisory panel was laying the groundwork for privatization within our EMS system. Today we were proven right. Rather than spending the last year working to improve EMS and fill the thousands of vacant shifts, the government spent that time lining things up for further privatization through contracting out.

“We cannot allow the UCP government to use this current crisis in EMS as another excuse to justify their agenda of privatized health care,” said Chris Gallaway, Executive Director of Friends of Medicare. “Every dollar of public health care money should be going into bolstering the public EMS system and protecting the health and safety of patients and paramedics, not used to line the pockets of private, for-profit contractors.”

A report from the Auditor General in New Brunswick has raised considerable concerns about the privatization of ambulance services in that province. While here in Alberta, the partial privatization of community labs to Dynalife  is creating chaos and delays for Albertans, and the opening of more for-profit surgical centres is only making our short-staffing challenges worse.

“As Albertans have repeatedly seen, the fact remains that privatization never leads to the cost savings and improvements in patient care that its proponents claim it will.” said Gallaway. “Ultimately, we need to put an end to the government’s failed privatization agenda which is only adding chaos to the system, and worsening the dire staffing situation facing our public health care.”

Despite repeated calls on the government to address the staffing crisis in health care, they have avoided taking action to improve working conditions for Alberta’s health care workers, including frontline paramedics. For over a year, the union representing paramedics, the Health Sciences Association of Alberta (HSAA), has been calling on the government to address the fact that a large percentage of Alberta’s paramedics are working on casual contracts that roll over every 90 days, meaning they lack job security, paid sick days and proper benefits.

“We are in an urgent staffing situation that requires urgent action, with a workforce plan to deal with widespread short-staffing and worker burnout, and closures impacting EMS, emergency departments and our entire public health care system,” said Gallaway. “Empty platitudes about retention from this government are nothing without action. We need a real and meaningful plan to retain the skilled workers we have, including giving full-time contracts with job security to paramedics who want it.”

Friends of Medicare also continues to advocate for the government to take meaningful action on the Drug Poisoning Crisis, which is putting additional pressure on our Emergency Medical Services and Emergency Departments.

“Drug poisoning-related ambulance dispatches and emergency room visits continue to rise, adding strain to our already struggling system. If we want to reduce our volume of calls we need the government to start supporting harm reduction initiatives,” concluded Gallaway.