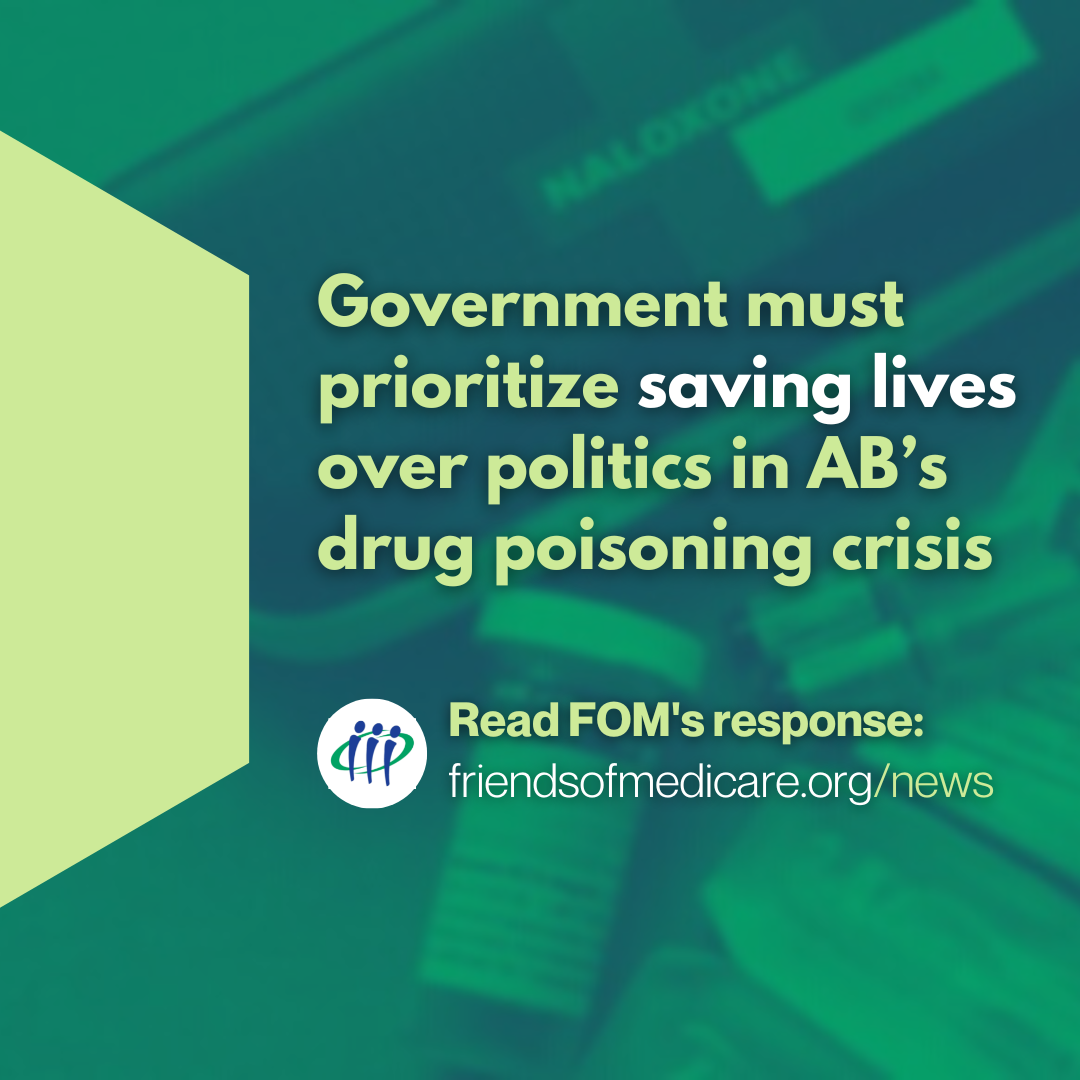 EDMONTON — Today’s announcement of a new Edmonton Public Safety and Community Response Task Force doubles down on the government’s failing approach, with no new funding or meaningful community involvement. The task force is made up of hand-picked folks who support the government’s agenda, while excluding impacted Albertans and front-line community voices for harm reduction.

“Edmontonians don’t need yet another task force, they need urgent action to save lives,” said Chris Gallaway, executive director of Friends of Medicare. “Instead, what we saw today was the appointment of a task force made up of the government's supporters, cherry picked folks from the City of Edmonton, and even a member of the Premier’s political staff, supposedly at the table to represent the community.”

Under this government’s leadership, Albertans have continued to die in record numbers from drug poisoning. But instead of changing course, the government remains rooted in rhetoric over evidence, and has been steadfast in its unwillingness to support life-saving, evidence-based, harm reduction approaches.

From January to August 2022, there were 976 reported drug poisoning deaths, higher than the same period in 2021, which was Alberta’s deadliest year on record. Drug poisoning-related ambulance dispatches and emergency room visits continue to rise, adding strain to our already overwhelmed health care system. In October alone, over 500 Emergency Medical Services calls were for overdoses, meaning ambulances were prevented from attending other calls because our government has failed to mitigate drug poisoning.

“More people are dying every day in Edmonton and across Alberta. Families and communities continue to mourn their loved ones who died without access to the care and supports they needed and deserved. Any one of them could tell you first hand that we don’t have time to waste on yet another task force to provide cover for the government’s failing approach to the ongoing drug poisoning crisis,” said Gallaway. “Another task force will not save lives. Hollow talk of abstinence-only ‘recovery,’ does not and will not save lives. There can be no recovery if you are dead.”

On November 29, the first day of the fall legislative session, Friends of Medicare joined with Albertans for Ethical Drug Policy to rally outside the legislature and call for action to save lives in this crisis. Albertans for Ethical Drug Policy, is a coalition of health experts, front-line groups and families impacted by the drug poisoning crisis. Minister Milliken has refused a request to meet with our coalition.

"The minister's refusal to even meet with Albertans for Ethical Drug Policy, which includes those working on the front-lines and those who have lost family members, is a slap in the face to everyone impacted by this ongoing crisis," concluded Gallaway. “This government continues to make it painfully clear which Albertans’ lives they value, and which they are more than willing to treat as collateral damage in their ideological agenda.”