#TBT: Fall of the General Hospital

Throw Back Thursday:
Fall of the General Hospital, October 4th, 1998

Today marks the 20th anniversary of the demolition of the Calgary General Hospital. Between 1992 and 2006, Alberta Premier Ralph Klein devoted his attention to eliminating Alberta’s budget deficit. Under his leadership, claiming health care to be one of the areas requiring the most ‘constraints’, Klein oversaw significant cuts to the health budget.

Between 1994 and 1996, the Klein government cut public health care spending by 21%, culminating in the reduction of per capita spending from $1,393 in 1992 to $1,156 in 1995. These cuts also prompted the elimination or reduction of hours for 14,753 health care positions, resulting in the loss of an entire generation of nurses. The slashes to health care spending were so extensive that Alberta’s total public and private health costs did not surpass its 1993 peak until 2001. Klein’s refusal to invest in much-needed infrastructure only served to create what we now see as a multibilllion-dollar infrastructure deficit, the impacts of which continue to affect the quality of our health care system.

In 2005, Premier Klein attempted to introduce his "Third Way" health-care system, which proposed changes that would allow for the expansion of private, for-profit delivery of health care in Alberta, in direct contradiction to the Canada Health Act. During Klein’s time in office, we also witnessed the closure of three downtown hospitals: the Holy Cross was once a major hospital but was sold in 1997 to Enterprise Universal and now operates as a private health center, the Salvation Army Grace was closed in 1996 and is now home to a private health clinic, while the old Calgary General Hospital was blown up on October 4th, 1998. Calgary General Hospital was a cluster of buildings run by a community of people all in the service of welcoming the births of babies, nursing the ill to health, caring for the frail and elderly, and comforting the dying. As the hospital fell, Albertans witnessed the sad end to an era. 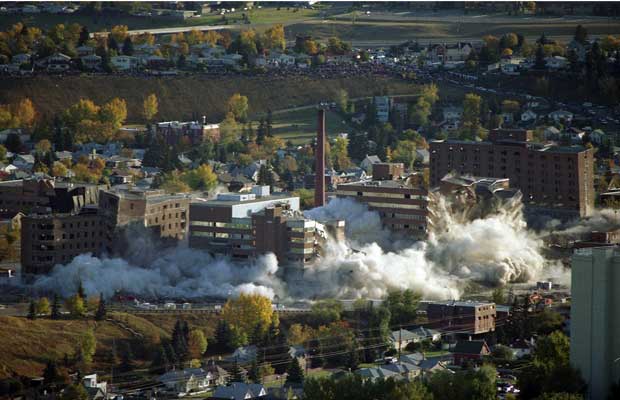 Today, most of us have lived our lives covered by Medicare, and so we find it difficult to imagine life without it. Conversations around health care are often sidelined at election time, with the focus instead placed on the economy. Yet given the amount of our provincial budget that is dedicated to health care, it begs the question as to why politicians do not clearly articulate how they plan to tackle the substantial task of ensuring that all Albertans have access to quality, timely public health care. As we have seen in the wake of the fall of Calgary's General Hospital, political decisions made in the spirit of austerity have far-reaching consequences in the lives and well-being of Albertans, and so it is crucial that the continuation of our public health care and other public services is front and center in these conversations.

It is the responsibility of all Albertans to become educated on the situation so that we may fight to not just save Medicare, but to strengthen and expand our public health for the needs of the 21st century – let’s learn from history so that we don’t repeat the same mistakes again.