Friends of Medicare are calling on Minister of Community and Social Services Rajan Sawhney to listen to the advice of guardians and a physiotherapist and stop any movement towards privatization of disability services.

The privatization of care for Albertans with disabilities could bring trauma and dangerous negative health outcomes to residents, and will mean killing the jobs of their caregivers.

“We’ve seen this before, and we know the consequences. When former Premier Redford tried to close the Michener Centre, she had 41 residents moved out, and 5 died in the transition,” said Friends of Medicare Executive Director Sandra Azocar. “The residents of public homes for the people with disabilities in Edmonton and Calgary are also vulnerable and aging. We shouldn’t be putting their health or lives at risk by moving them out and ending the relationship with their caregivers.”

Approximately 200 guardians of disabled Albertans were given notice on June 10th that the UCP government is “exploring alternative service delivery”—code for privatization of Edmonton’s Rosecrest home for children, the Hardisty and Balwin respite centres, Edmonton group homes, and Calgary’s Scenic Bow home. This was to be a 90 day “consultation” with unionized staff, but the 90 days have come and gone, while no decision has been made and guardians have been left in the dark about the process.

“Many of these people are literally unable to speak for themselves, but their guardians have made clear they didn’t ask for this, they don’t want this, and they want the government to stop privatization,” added Azocar. “We’ve also received a copy of a letter written by an Alberta physiotherapist addressed to Premier Kenney, outlining their concerns for the health of these residents.”

The letter from physiotherapist Lara Shelrud reads: “If these residents lived in large private facilities they would not receive the care they require. I anticipate increased hospitalizations and increased complications, such a(s) pressure wound development.” Shelrud continues: “To discard them now when they are at their most vulnerable during a pandemic is despicable and heartless.”

“Friends of Medicare have also written a letter to Minister Rajan Sawhney urging her to stop this privatization. We need all hands on deck in our health system during this pandemic. We should not be risking additional burden by downgrading care for Albertans with disabilities, risking their hospitalization or death,” said Azocar. 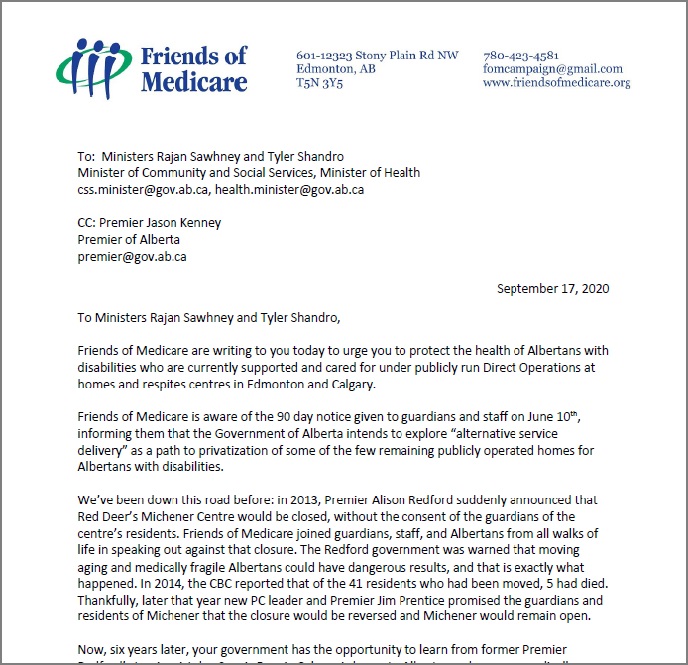