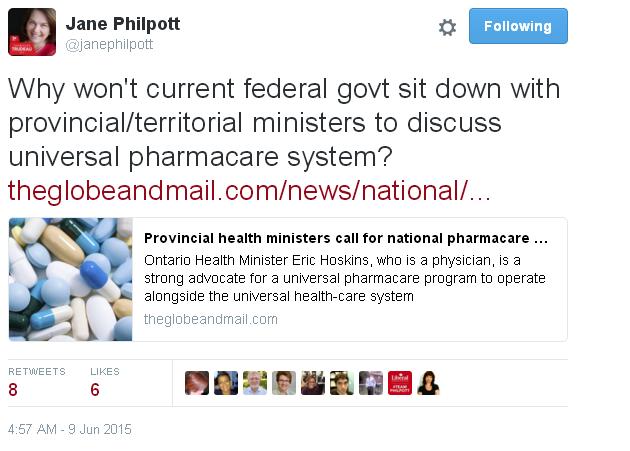 "We welcome Dr. Philpott to her new role. Canadians voted for change in this election, and there are many needed changes for our health care system," said Sandra Azocar, Executive Director of Friends of Medicare.

"While the Liberal platform was lacking a commitment to a universal pharmacare program, we are pleased to see Dr. Philpott has been a vocal proponent of such a program."
The recent  Liberal election platform promised a bulk buying program for prescription drugs, but fell short of a much needed universal pharmacare program. Dr. Philpott's twitter account @janephilpott shows multiple tweets from 2013 to this year advocating for a universal pharmacare program including June 9, 2015when she tweeted "Why won't current federal govt sit down with provincial/territorial ministers to discuss universal pharmacare system?"
"It is our hope that our new Health Minister's strong views on pharmacare will help her Cabinet colleagues see that bulk buying isn't enough. Canadians deserve and need access to a universal program for prescription drug coverage regardless of where they live or their ability to pay," added Azocar. "Prescription medicine has become a growing part of our health needs, and should not be viewed as a luxury."
Do you like this post?
Tweet
Sign in with Facebook Sign in with Twitter Sign in with Email
Follow @FriendsMedicare on Twitter
Subscribe with RSS