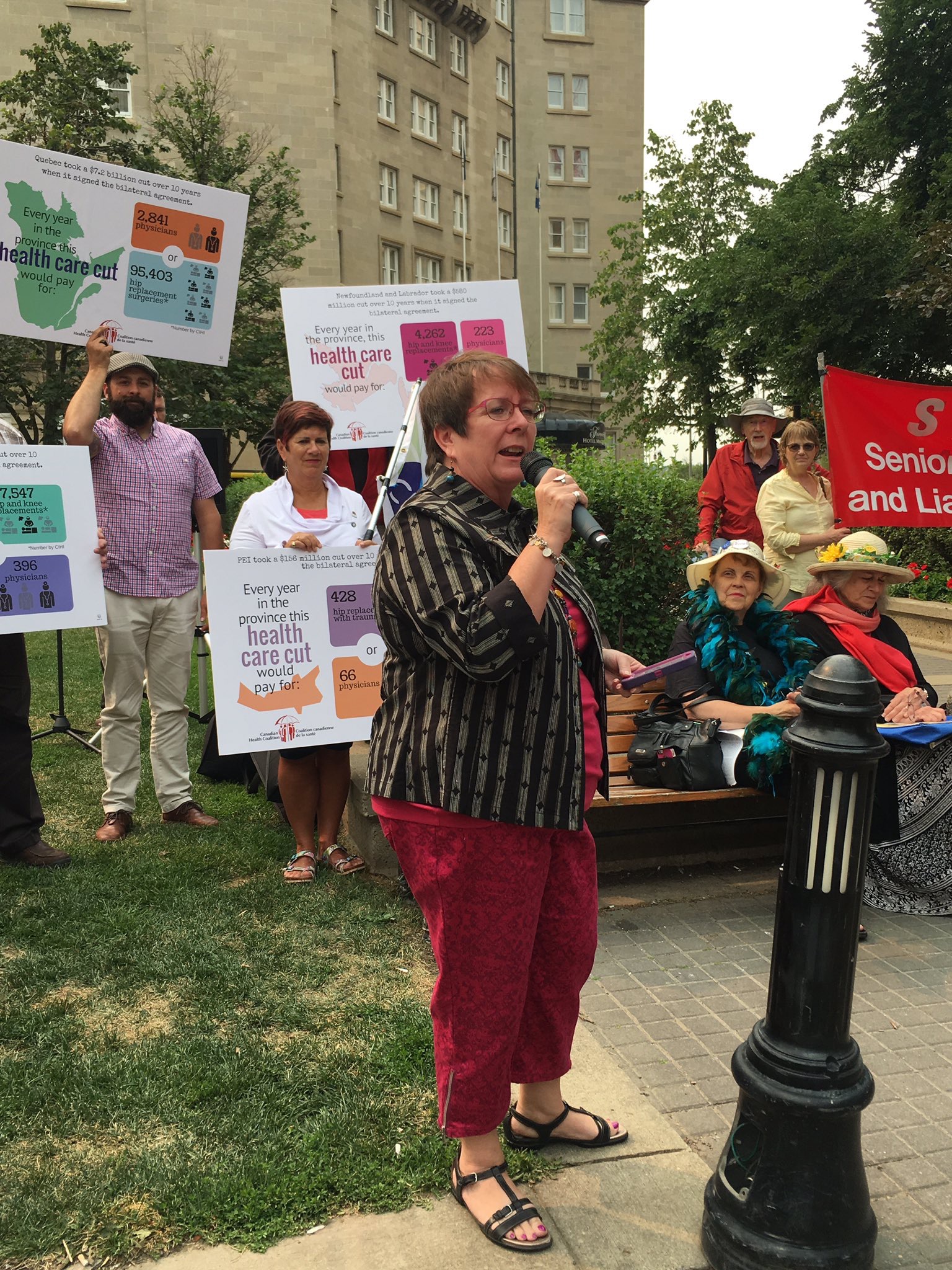 Health care advocates from across the country gathered in Edmonton today at a rally outside the Hotel Macdonald to call on Canada’s Premiers to fight for patients and call for fair federal funding for health care.

“In the 2015 election, the Trudeau Government promised to provide collaborative federal leadership while negotiating a new Health Accord with provinces and territories,” said Adrienne Silnicki, National Coordinator, Canadian Health Coalition. “But instead the Federal Government split apart the provinces and territories and made bilateral agreements that will amount to a $33 billion cut over 10 years. The bilateral deals ignore the need to create national pharmacare, take action on a national seniors strategy, and do a better job enforcing the Canada Health Act to stop unlawful billing by private clinics.”

The Office of the Federal Parliamentary Budget Officer, Conference Board of Canada, and Financial Accountability Office of Ontario all have shown that the provinces and territories need federal money for health care to grow by 5.2% year over year in order to fund the current basket of provincial and territorial health care services.

The current funding deal is for a 3% increase every year, or matching the percentage of GDP growth, whichever is greatest. Assuming 4% growth in GDP, we see a cut in $33 billion to public health transfers compared to the needed 5.2% escalator.

“The provinces and territories were pressured into these side deals that will mean our provincial health care systems end up having to do more with less, and that will hurt Alberta patients,” said Friends of Medicare Executive Director Sandra Azocar. “Alberta needs over 4,000 long term care beds to meet current needs, and this lost funding could have been put towards building over 500 public long term care beds each year.”

“The provinces and territories simply can’t afford to shoulder the proposed federal cut to the funding formula,” said Natalie Mehra, Executive Director, Ontario Health Coalition. “We are also deeply concerned the federal minister’s proposed “transformation” will lead to damaging cuts to public hospitals. Funding needs to meet projected population need for hospital care and we need to create a continuum of public health care for the aging and chronically ill.”

“Newfoundland and Labrador is under significant pressure to either find additional revenues, or continue to cut services,” said Mary Clarke, chair of the Health Coalition of Newfoundland and Labrador.  “We cannot accept that support for patients should drop when the economy declines. We need a fair deal with guaranteed increased funding, it’s time for our Premiers to speak up and for Justin Trudeau to come back to the table with them.”