An update from our Executive Director 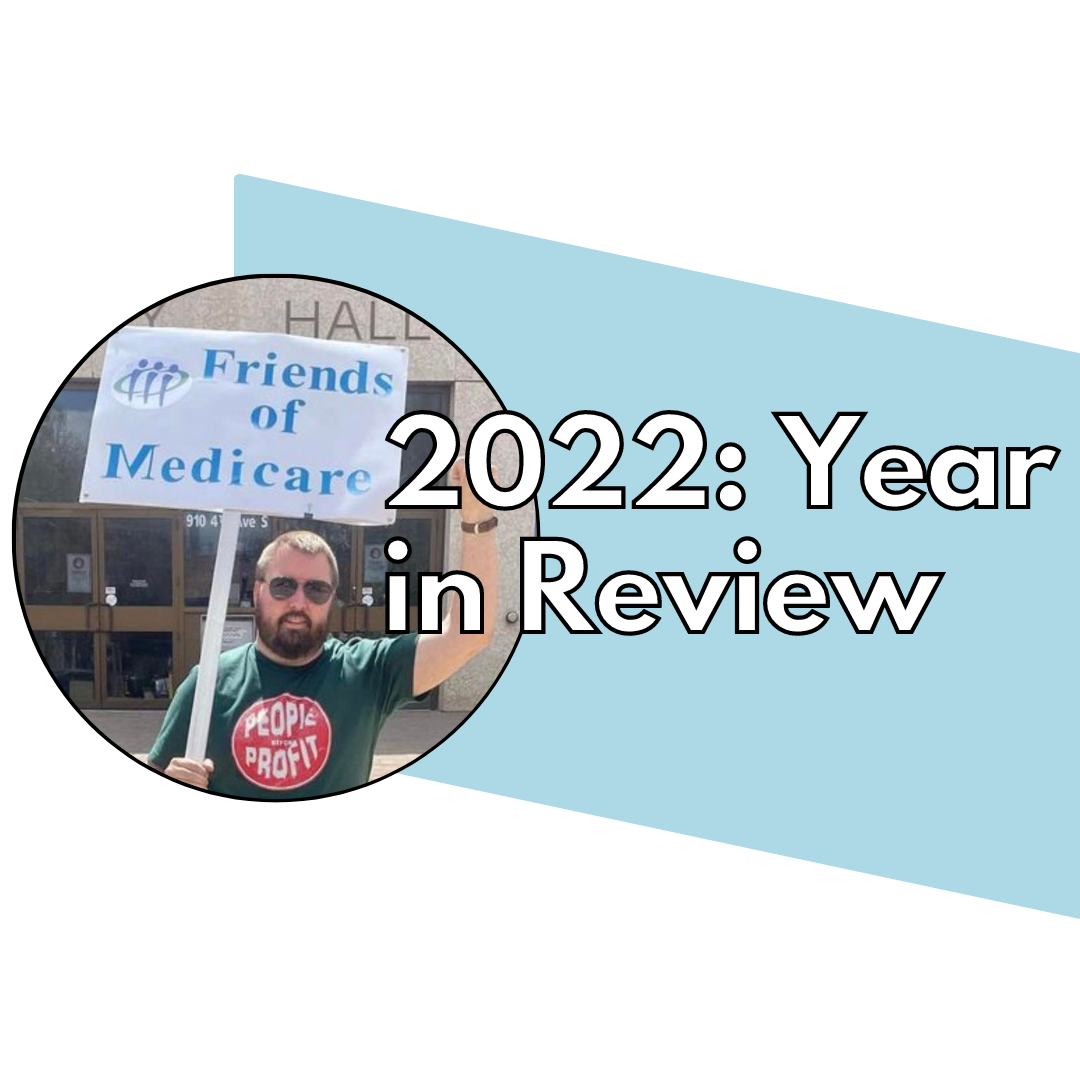 This week marks a full year since I began my role as the Executive Director of Friends of Medicare. The year has truly flown by! I am honoured to be doing this work alongside all of you.

I want to take a moment to reflect on the year that’s been, and where we are headed in 2023. Below are some of the highlights from key areas we’ve been focused on at Friends of Medicare.

Fighting Back Against Privatization

Privatization remains our top concern right now. While Albertans are feeling the impacts of the short-staffing and closures hampering the health care system across the province, the government is capitalizing on this crisis to frighten the public into accepting privatization as the solution to our problems.

But the truth is, what’s happening is no accident. It’s an age-old strategy to undermine our public services: First, they break it, then they privatize it. This is exactly what the UCP are doing before our eyes.

The past year, the government have been full speed ahead on this agenda. They turned over the majority of our community labs to DynaLIFE in a sweetheart deal, expanded for-profit surgical centres, announced the privatization of Emergency Medical Services (EMS), and made privatization announcements around ophthalmology, food and laundry services, home care, seniors care, and more.

➤  You can read more of our releases on Privatization here.

EMS red alerts are skyrocketing as hundreds of paramedic shifts go unfilled each week. Albertans are waiting for hours at Emergency Departments. Over 30 hospitals and health care facilities across the province are currently experiencing temporary closures. All while thousands of Albertans have been left without a family doctor.

It is clear that Alberta is in the midst of a health care staffing crisis. This is an increasingly urgent situation that needs an urgent response. Which is why we have been calling on the government to create a workforce plan that will retain the workers we currently have, recruit new workers into the system, and train the skilled health care workers we need now, and in the years ahead.

Friends of Medicare was proud to stand in a joint call for action alongside the United Nurses of Alberta (UNA), Health Sciences Association of Alberta (HSAA), Alberta Union or Provincial Employees (AUPE), and Canadian Union of Public Employees (CUPE) as the unions representing health care workers calling for solutions. We will continue to be vocal on the staffing crisis in health care in the months ahead.

Alberta seniors deserve better than to be treated as commodities. But that’s exactly what we continue to see with the government’s announcements on continuing care and home care.

We continue to push our joint Alberta Seniors Deserve Better campaign between the Public Interest Alberta's Seniors' Taskforce and Friends of Medicare, including our call for an Independent Seniors Advocate.

➤  You can read more of our releases on Seniors Care here.

Albertans need universal pharmacare. And we are closer than ever to achieving it!

The federal confidence and supply agreement between the Liberals and NDP remains in place and gives us hope that national pharmacare may finally be on the horizon. As part of the agreement, a National Pharmacare Act is supposed to be passed through parliament this year. Take a moment to use our online tool to let your MP know you expect them to keep their promise and implement a national single-payer Pharamcare plan.

➤  You can read more on our push for pharmacare here.

2021 was our deadliest year yet for fatal drug poisonings, and the final numbers for 2022 aren’t likely to be any better. Action is urgently needed to curb this deadly public health crisis, but instead, the government is doubling down on their failing ideological approach while playing political games and spreading harmful rhetoric.

Which is why we continue to push for action along with the grassroots groups who make up Albertans for Ethical Drug Policy. In the past year, we have jointly planned ‘Dying for Access’ events at the legislature and will continue to push for comprehensive mental health and addictions supports that include life-saving harm reduction services.

➤  You can read more on our Mental Health and Addictions work here.

Stopping the Attack on Insulin Pumps

Albertans won a major victory this year, in the ongoing struggle following the government’s announced cut of the Insulin Pump Therapy Program. After a massive public outcry, with the government reversing their planned cut to the program! It is crucial that we keep up the pressure to ensure that the program is expanded based on evidence-based diabetes management practices. If you haven’t yet emailed your MLA, please do so in solidarity with Pump 4 Life.

Fighting Back Against Pay for Plasma

This past fall, Canadian Blood Services announced a deal with a giant private, pay-for plasma company to provide blood plasma collection services for them. This is a major betrayal of Canadian Blood Service’s own mandate and their ongoing, successful plan to expand public plasma collection. In response, Friends of Medicare and health coalitions across the country launched a joint release warning of the dangers of this deal and calling for our governments to act to protect our voluntary blood and plasma system. We have spoken up loudly and taken action and will continue this fight in the year ahead.

Ensuring Status for All

On Sunday, October 16, we joined with the Migrants Rights Network and allies with actions outside of the offices of federal Cabinet Ministers across Canada, to call on them to keep their promise to ensure regularization for undocumented migrants and permanent resident status for all without delay. In advance of the day of action, Friends of Medicare had joined over 50 organizations, and more than 800 health care workers from across the country in signing on to a public open letter calling for Status for All.

The Migrant Rights Network is ramping up the pressure heading into next week’s federal cabinet retreat. Friends of Medicare encourages Albertans to support their calls for action on this important issue.

In order to do so, we need to reach as many Albertans as possible to ensure our collective voices are heard.

Because everywhere I go Albertans tell me that health care is their top issue. They also tell me that they don’t believe the government’s claim that privatization is the only solution to our challenges. They agree with our message and know Friends of Medicare has their back.

As we start 2023, it's encouraging to see that our movement is growing. To our members and donors: I can’t thank you enough for your support in this important work. If you haven’t already, please take a moment to join us in this fight. You can renew your membership or donate here.