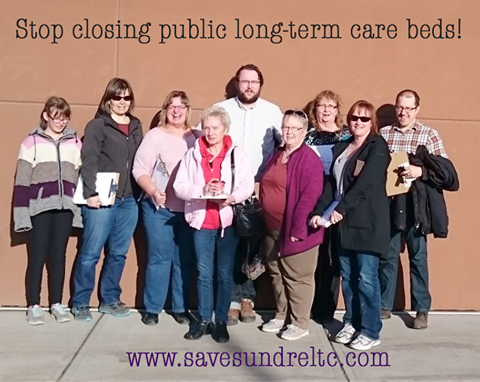 Albertans clearly voted to expand public long term care delivery, not shrink it. The Alberta NDP platform had promised 500 public beds to open per year, and we are now almost a year into our new governments mandate. We still do not have details for any publicly delivered long-term care beds, and now there are plans to close 15 beds.

We have noticed a bit of confusion around the planned closure of long-term care beds in Sundre, so we wanted to provide more background information to detail what has happened, why it’s an issue, and what people can do about it.

What has happened in Sundre so far

Mountain View Seniors Housing (MVSH) has planned to build the new facility in Sundre since at least 2012 when they submitted a plan to the government’s Affordable Supportive Living Initiative program, and were approved based on their identified need for more seniors care in the Sundre area. The facility would provide 103 spaces, including 40 supportive living level 4 beds (SL4).

The facility was planned to add to the range of services for seniors to the elderly population in Sundre, and the facility was never proposed as a replacement of the long-term care beds in the Sundre Hospital.

Neither Alberta Health Services, the past PC government, or current NDP government explained to the board of MVSH, the patients and staff at the hospital, or the residents of Sundre that opening a new supportive living facility would result in the closure of their long-term care beds.

This lead Mayor Terry Leslie to call the decision a “shock to the community” when he and Sundre town council learned of it from AHS on March 7.

The new facility is set to open this summer, while the long-term care beds in the Sundre Hospital are set to close in July.

We have learned since that AHS did pre-move assessments on the Sundre Hospital residents. This suggests that this decision was known ahead of time, providing opportunity to consult well ahead of the sudden March 7 announcement.

Public confusion about what this means

AHS has described this decision as an “increase in capacity” but this is a misleading statement. Long-term care is not an interchangeable health service with supportive living, and should not be presented as such.

It’s important to recognize the difference between long-term care and supportive living care. Long-term care is care for those with the highest need and are often requiring complex care. Legislatively they require on-site availability of a Registered Nurse 24 hours a day. Medications and other medical supplies are covered without cost to the patient. The higher level of care is supported by stronger legislation and regulation than in supportive living.

Supportive living care has levels starting at 1 and going to the highest level of 4, as well as 4D for dementia patients. These patients do not have medications and other supplies covered, and are not mandated to have 24 hour registered nurse availability. "Eviction by ambulance" is an unfortunate occurrence in supportive living when someone becomes ill and is told they must find somewhere else to live because they can no longer be cared for in what they had thought was their home.

The opening of the new supportive living facility in Sundre was intended to add supportive living beds to increase the range of care available, not shrink it. While the new facility would not provide long-term care, people were comfortable with the idea that that care would be available just across town instead of in another community.

As mentioned before, the downgrading of service from long-term care to supportive living also means a downgrading of costs on to patients and families. We expect our governments to work towards greater coverage of medical needs and services, not less.

Are assessments being driven by patient need, or AHS politics?

Patterns of bed and facility closures and relocation are not isolated to Alberta. The impacts on ill and elderly populations have been studied and in 2002 Ontario-based researcher Victoria Robinson surveyed forty years of research and found that during patient relocation those who are transferred are anywhere from 1.99 to 3.76 times more likely to die than those not transferred. This is a very unfortunate effect of these kinds of decisions. Many resident deaths have coincided with past closures in Alberta.

We have asked for and not received any information as to what the wait times are in the Sundre region for long-term care. While AHS had admitted there are likely patients in acute care hospitals who are waiting for long-term care placement in nearby communities like Olds, they were not able to provide a number as to how many. We also do not have information as to how many people in the region are still waiting to be assessed to determine if they also need long-term care placement.

As Carol Wodak has pointed out in her recent summary of the issues in Sundre, the new facility has received $3.8 million in Affordable Supportive Living Initiative funds from the Alberta government, as well as a top up to $8.2 million in total public funding from the federal government.

When the facility opens, they will be provided operational funding from AHS for the care provided. As we have seen under the PCs, with no changes since, this funding comes with very little accountability. While we hope this doesn’t happen in Sundre, we’ve seen in community after community that operational funding for care workers does not necessarily end up going to those workers, leaving them underpaid and undervalued in comparison to fellow workers doing the same job at AHS facilities or even in other private facilities.

We do not believe public funds should be used to create inequalities among front line caregivers.

Health care work is heavily unionized, even in Alberta. Many front line workers choose unions because of the greater certainty in working conditions, health and safety protections, and greater equality with other health workers that unionized workplaces tend to provide.  Mountain View Seniors Housing is a non-union operation. Ultimately it will be up to the new staff as to what they want to do about that situation, and we hope their choice is respected. In other communities we have seen unnecessary resistance and tension in choosing a union at a new facility, and problems reaching comparable or equal collective agreements in the future.

The residents that are still assessed as needing long-term care in the Sundre Hospital have been told that their care will be provided on a grandfathered basis in the new home run by MVSH, and AHS will pay for the extra care required. As a supportive living facility, MVSH would not have required nor paid for 24 hour on site registered nurse availability. At the same time, as both an acute care hospital and a long-term care facility, the Sundre Hospital was efficiently providing round the clock RN availability. While long-term care was provided in the hospital, medical emergencies could be taken care of quickly and efficiently, whereas now patients will need to be transported to have more serious medical needs dealt with.

Where is this going to happen next?

As a province-wide organization, we have concerns that Sundre is not the only community that will be facing this kind of situation. AHS has referred to this as a “new model of care”, but no details have been forthcoming as to which communities should expect to be impacted by this new model. Given that the Sundre announcement came as a surprise to the community, many rural Albertans have to wonder when and how they will find out about their own long-term care services.

How do we fix this?

We are asking AHS to:

Stop the closure of the Sundre long-term care beds. Disclose any plans by AHS to close long-term care spaces in any other rural community in Alberta, and reverse those plans.

What can I do?

Go to the AUPE Save Sundre LTC website. Send a letter to Health Minister Sarah Hoffman.

Concerned citizens will be going door to door in Sundre and other communities through Alberta.

Meet at the Tim Hortons in Sundre at 849 Main Ave W.