Let's Call it What it is: Cutting Though Kenney's Privatization Double-Speak

Last week Jason Kenney’s health care announcement guaranteed "public funding" of our public health care, but stayed away from guaranteeing public delivery or an expansion of our current public system. He reiterated that he would not let “ideology” stand in their way of looking into alternate "options," including the use of private providers. There was no clarity as to what that would look like. Ideology only seems to come into play when you don’t agree with it. It is naïve to believe that political parties do not have an ideology guiding their policies.

For Friends of Medicare, it is very simple: what guides our work for a stronger public health care is the firm belief on the values that served to create our medicare system -- the values of equity and egalitarianism. If we can’t be equal when we are sick then where are we equal? These words need to mean more than political talking-points. We made a pledge over 50 years ago that no Canadian would ever die or go bankrupt because they can’t afford health care.

Private vs. public is a landmine for politicians in Alberta and they have learned to dance around the subject by using rhetoric that is not clear in its intent. Albertans are often left trying to sift through the misrepresentation of their agenda. The illusion of "choice" or the concept of "competition" is tossed around as if health care is a commodity that can be sold to the highest payer. It undermines the importance of health care as an essential public service.

The key issue to highlight in the conversation about a two-tier system is the fact that it threatens the key feature of Medicare  equitable access — by allowing speedier access for those who pay. It is about allowing corporations to create two classes of citizens and two levels of health care — one for those that can pay out of pocket and one for the rest of us. Private health care is not about a patient’s right to pay; it’s about a doctor’s right to charge.

In a speech Jason Kenney made at the Whitecourt Chamber of Commerce in on February 12th, 2018, he touted the production-line efficiency of Cambie clinics while talking down the work and professionalism of our front-line workers.

What Kenney forgot to mention is that Brian Day, CEO of the Cambie Surgeries Corporation, is currently leading the charge in a court case that threatens our health care system.

He forgot to clarify that Brian Day is the same one who has been quoted for his belief that ordinary Canadians do not deserve the same quality treatment as rich people. “We in Canada will give the same level of services to a wealthy person as to a person who isn’t wealthy, and that doesn’t make sense,” he says. Day has become the poster boy for the audacity of greed.

What Kenney forgot to mention is that private health care maximizes price and cost as well as waste, so it systematically erodes global cost control, which is one of the essential strengths of a public health system.

We do not want to see our health care turned into a shopping experience. We want to be safe in the knowledge that when we require care for our loved ones and ourselves it will be provided based on need and not ability to pay.

Roy Romanow, from the final report of the Royal Commission on the Future of Health Care (2002)¹

Brian Day, from a presentation to the Fraser Institute (2006)²

A little backgrounder on Cambie clinics and their role in trying to decimate our public health care:

Brian Day launched the lawsuit in 2009 after he learned his clinics were going to be audited by the BC Government. The audit was triggered by dozens of patients who complained that they’d been illegally over-billed at Cambie's clinics. 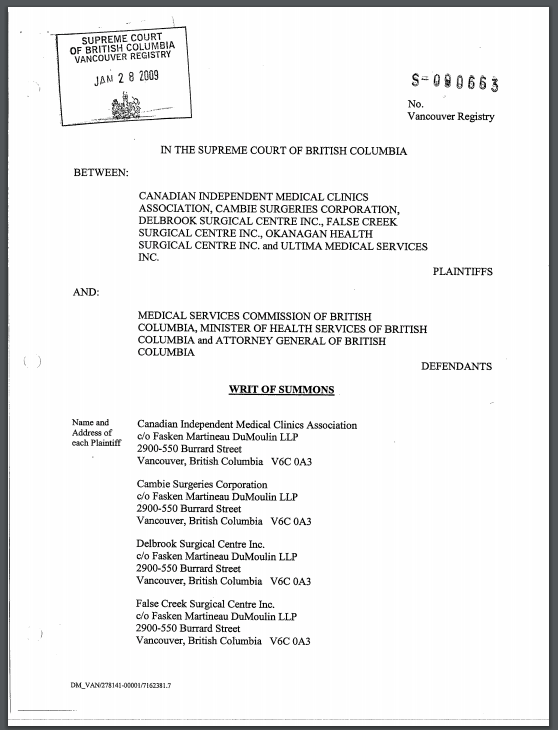 The clinics lawsuit challenges the single most important feature of the Canadian model: that health care be provided according to a patient's need and not his or her ability to pay for treatment.

All of the corporate plaintiffs except for Day's Cambie Surgery Centre and the Specialist Referral clinic have dropped out of the case. Four patients, two of whom received care at Cambie, have since joined the remaining clinics as plaintiffs.

The plaintiffs are asking the Court to rule that four sections of B.C.’s health care legislation (the Medicare Protection Act) violate the Canadian Charter of Rights and Freedoms. They argue that the prohibition on user fees, extra-billing (charging patients more than the legal amount), and the ban on duplicative health insurance (the sale of private health insurance for services that are already covered by public health insurance) violate the Constitution.

The plaintiffs argue that these rules violate two sections of the Charter: Section 7 (the right to life, liberty and security of the person) and Section 15 (every individual is equal before and under the law).