On October 31 Cypress-Medicine Hat MLA and Wildrose Health Critic Drew Barnes tabled a question in the legislature to seek information on per unit costs of blood plasma purchased by Alberta Health, broken down by supplier.

Barnes’ support for for-profit paid plasma collection is likely the motivation for seeking such information, but in the ongoing discussion of Canadian supply and its cost this is a bit of a red herring.

Canadian Blood Services has said they do not intend to purchase any of the plasma purchased from vulnerable Canadians by Canadian Plasma Resources. So supporting profitable blood brokers in Canada will not help with Canadian supply, and it will not reduce our reliance on American paid plasma. 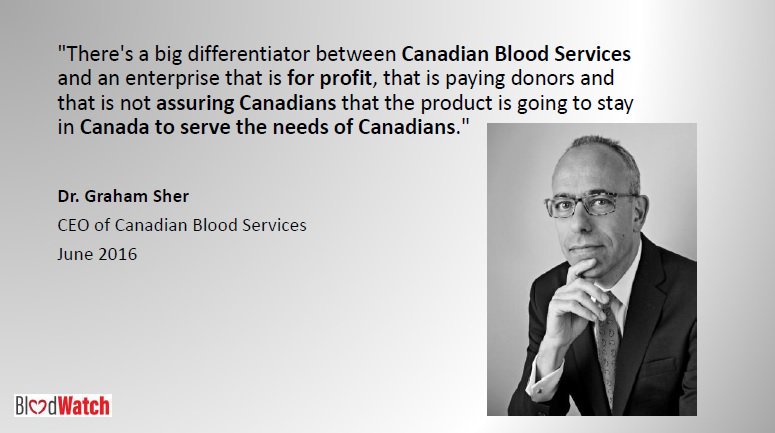 Remember that among others, the Krever Inquiry into the 1980s tainted blood scandal, the World Health Organization, and many others, have recommended against paying donors for blood or plasma.

Here’s why: Canadian Blood Services have stated they plan on greatly increasing their voluntary collection in Canada, reducing our reliance on American paid plasma, and the ups and downs of currency values across the border. These plans will be harmed if we allow a parallel, private, for-profit paid system to co-exist, as Canadian Blood Services will be competing with brokers like Canadian Plasma Resources for donors, having to sink more money into advertising and other voluntary donor recruitment strategies.

It looks like the Wildrose have not backed down from their push to see these brokers operate in Alberta in competition with Canadian Blood Services. At the same time we are pleased that the Alberta NDP Government have been firm that they want to support and protect our voluntary system.

We learned from the Ontario experience that Canadian Plasma Resources opened up shop without provincial approval, and had operated for months before legislation could be passed.

We hope to see the Alberta NDP put action behind their position and introduce legislation similar to Ontario’s Voluntary Blood Donations Act before that happens here.