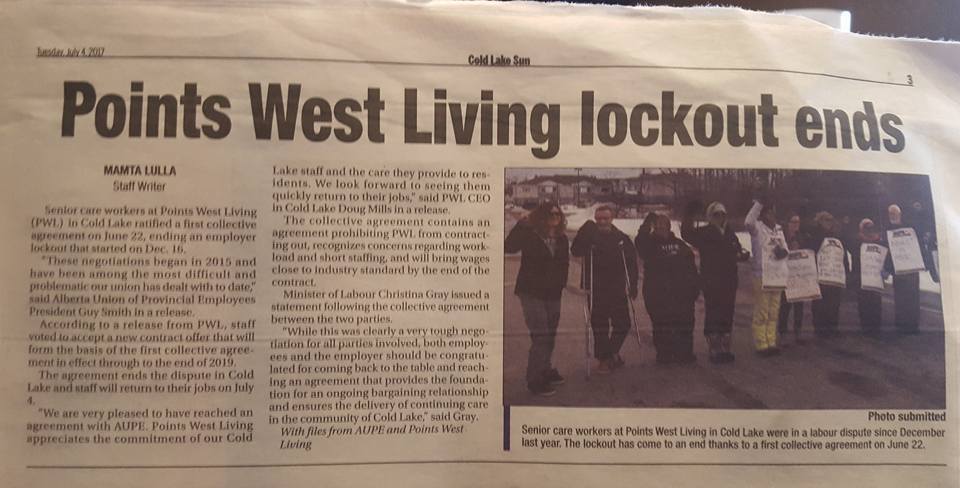 This was the first health care labour dispute since the change in government, and we can see what’s changed and what hasn't in continuing care.

The dispute no doubt highlighted some problems with existing labour law, and Bill 17 should reduce the amount of disputes seen in places like Cold Lake PWL. However, the bill restricts the right to strike for private continuing care workers, and now has them designated as “essential services” while leaving them undervalued compared to the other "essential" staff working for AHS.

Staff who go through the same education and training as those working for AHS receive compensation as low as 30% less than AHS. In Cold Lake their new contract will still have them behind AHS staff, leaving issues of inequality unaddressed.

This leads to increased turnover, and another problem where underpaid staff end up with multiple health care jobs, and when competition exists among facilities, the patients at the lower paying centre suffer.

While the dispute helped create some positive changes to labour law, the regulations in continuing care remain unchanged. Last year the Alberta Government started consultation on the regulations of long-term care and home care. Friends of Medicare were able to make recommendations to improve the system, but no report from the review or proposed changes have come forward since.

At the same time, those regulations would not touch supportive living centres like the one in Cold Lake. The government needs to look at how the regulatory regime created by the PCs shortchanges patients and staff, then make changes to improve the patient experience, add transparency and accountability for private providers, and address staffing issues.

The issues the patients and staff faced and still face in Cold Lake, and at many private providers around the province should not go ignored.

After the dispute, the staff in Cold Lake recognized the support of Friends of Medicare through their dispute, and so we pass along that thanks to all of our supporters who wrote a letter, signed a petition, or otherwise supported them in their cause, and supported us in our work!

Our advocacy on continuing care is not finished. We will be holding MLA advocacy training on October 3rd in Edmonton and October 5th in Calgary to support our members who want to encourage positive change for continuing care, as well as private clinics, and access to prescription medication.

While you're here, don't forget you can support our ongoing work through membership in Friends of Medicare by way of donation. We can't do what we do without you!