We wanted to share this letter from Whitemud Citizens for Public Health to Member of Parliament for Edmonton Centre, Randy Boissonnault 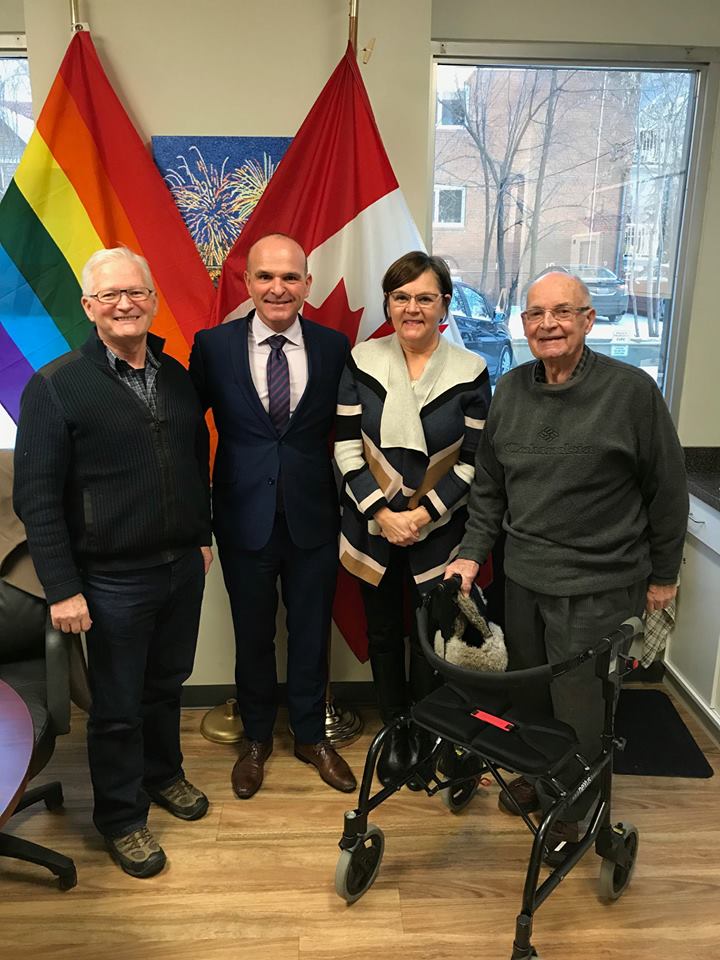 Whitemud Citizens for Public Health (WCPH) is doing great work as advocates for a better public health system. This is a great example of bringing issues in front of Members of Parliament.

Friends of Medicare is happy to help others interested in meeting with their MPs as well.

Members of WCPH met with Edmonton Centre MP Randy Boissonnault about the federal responsibility for funding pharmacare, medicare and the continuation and expansion of the Canada Health Act. Their full follow-up letter can be found below.

The Whitemud Citizens for Public Health (WCPH) wishes to express our thanks to you and your staff for meeting with us on January 10, 2018.

We noticed upon entering your office that your schedule was very full, so we were are all the more appreciative of your willingness to meet with us. Your comment about why not meet with Edmonton Riverbend MP Matt Jeneroux made us wonder, though, if you thought we were meeting with the wrong MP. Perhaps you did not know the breadth of our membership, which is made up of Albertans from many constituencies including Edmonton Centre. You may not know that we work with other advocacy groups too, so our reach extends beyond us and beyond Edmonton. We also wondered if you were unfamiliar with the WCPH and its history of effective advocacy work. Our Facebook page at Whitemud Citizens for Public Health can provide you more detailed information about who we are and what we stand for. We hope you will take the opportunity to learn more about us.

We thought it important to meet with you, as you are one of only three Liberal government MPs representing Albertans in Parliament. We came to you in particular, looking for leadership during these difficult times in public health care. In 1984, the Canada Health Act was a singular achievement by the Liberal government under the leadership of Prime Minister Pierre Elliott Trudeau. We are hoping that Prime Minister Justin Trudeau still wants to protect his father's legacy. We came in concern about the slippage in provinces' adherence to the principles of the Act and the alarming rate of devolution of public health care services to the private sector. This trend began when the Conservatives were in office, but has continued under your government's watch. This is why we formed our advocacy group in 2009, and why we were in your office in 2018.

When we explained our concerns about the deterioration in public health services, we were surprised to hear you tell us that the Federal government is not in the business of "delivery" of health care. Your comment was beside the point we wished to make. While it is true that provincial governments have flexibility in defining public health programs according to the unique needs of their populations, they are accountable nonetheless to the Federal government. The provinces are required to provide publicly-funded access to medically necessary hospital and physician services while upholding the principles of the Act. The Harper government saw a minimal role for itself in health care, and ignored privatization attempts in contravention of the Act. The Conservatives were guilty of reducing federal funding, so the provinces, unable financially to maintain public services, began off-loading them to private entities. Patients for example were faced with real costs for pharmaceuticals, home care, physiotherapy, and other medically necessary supports after being discharged from hospitals.

To our dismay and disappointment, your government brought the same neoliberal perspective as the Conservatives to the Health Accord negotiating table. In the end, federal funding was reduced, bilateral agreements were negotiated, and a single, coherent Canadian public health care system became a patchwork of two-tiered provincial services. Canadians travelling from one part of our country to another can no longer expect consistent services as promised by the Canada Health Act.

We came to remind you that Canadians voted Liberal in 2016 in large part because they feared the loss of public health care under the Conservatives. The Liberal platform led them to believe our much loved system would not only be protected but enhanced by a Liberal government. We met with you, a Liberal MP, to remind you of that promise, and that as Canadians we expect to see real change in the health care file soon. It simply would not be acceptable to us and the overwhelming majority of the electorate if the Liberal Party were to enter into the next election with the same promise unfulfilled.

We came to lobby for an expansion to the Act to include such medically necessary services as provision of pharmaceuticals, home care, long term care, mental health care, and dental care. You know that we are not alone in our wish to see the Act expanded. We are linked to advocacy groups across Canada who are stepping up their advocacy too. We are aware that, as early as 2003, when the Health Accord was first brokered by Prime Minister Paul Martin, the possibility of an expansion to the Act was discussed with enthusiasm. Any movement in this direction came to an end with the election of the Harper government, but the Liberals have the power to act before the next election. We urge you to take advantage of this opportunity now.

The idea of marrying the ideas of expanding the Act and negotiating a new Health Accord forthwith makes sense to us. A Nanos Research poll in 2009 showed 86.2 percent of Canadians support strengthening public health care rather than expanding for-profit services. This level of support has not changed much over the years. We know grassroots Liberal Party members have put forward similar policy resolutions. Consider the savings. The Parliamentary Budget Office estimates, at minimum, $4.2 billion in savings if Pharmacare alone was to be implemented. Other estimates show savings of $30 billion. With Prime Minister Trudeau's leadership, we believe it would be easier to negotiate a new Accord with provinces if it included an expanded Act and the requisite funding for implementation. Morally it would be the right thing to do, and would be the kind of bold move that Canadians would celebrate. We do not accept that the government can only accomplish a new Accord or an expanded Act, so we do not understand why you would ask us to choose one or the other during our meeting.

Finally, we remain puzzled by your statement that, even though the Health Accord has come to an end and the Liberal government has established bilateral agreements with the provinces, the 6 % escalation in Health Care funding for provinces remains in force. Rather, our information shows that under the bilateral agreements with provinces the escalation factor is determined by the province's GDP or 3%, whichever is greater. Please let us know if we are wrong.

We are very pleased to have your voice supporting our views and concerns in Ottawa. We look forward to a follow-up meeting when we can discuss the Liberal government's real progress on improving public health care.