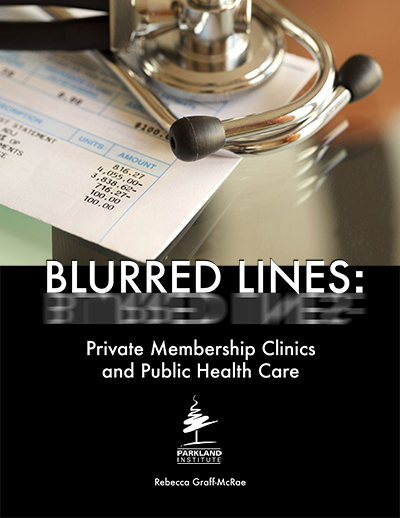 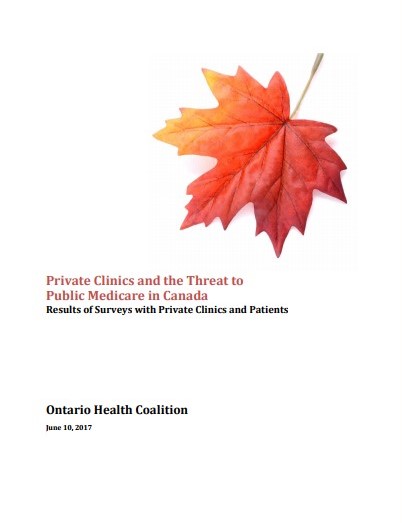 The case against private clinics got even stronger in 2017. Two reports were released - Blurred Lines: Private Membership and Public Health Care by the Parkland Institute and Private Clinics & the Threat to Public Medicare in Canada by the Ontario Health Coalition (OHC) that showed problems with excessive fees and implied queue jumping for the wealthy in Alberta and across the country.

This of course goes against the principles of the Canada Health Act (CHA), that are as relevant now as they are when the law was passed in 1984. The CHA was created in response to doctors billing patients extra on top of payments they received from the provincial health ministries. So why does it look like this practice is still happening?

With the CHA in effect for over 30 years, private clinics have had time to devise strategies to exploit grey areas of regulation and enforcement. Clinics are careful to say that the thousands of dollars in membership fees are for uninsured services, while enticing patients with implied promises of quicker access to diagnostics and surgeries.

The OHC report surveyed 13 clinics in Alberta and found 8 with suspected user fees, ranging from $1775 and over $950 for an MRI.

The myth of private care is that it is supposed to serve more patients quicker, but they make the problem worse. Financial incentives for procedures mean patients are upsold and over-referred in place of those who are truly in need. We also know that health care staff are a finite resource, and while doctors are enticed to perform expensive procedures for-profit, they aren’t helping patients in the public system.

The market for private care has been facilitated by governments de-listing services, and cutting budgets in the public sector. Setting medicare up for failure like this has increased temptation and demand for the misleading comforts private clinics advertise. Even with the change in government in Alberta we have seen private clinics open for MRI and fertility services.

One positive development was the announcement by Minister Sarah Hoffman of an audit of the Copeman Clinic, which should be expanded to other profit driven fee based clinics.

At the same time, the Parkland report looked at Alberta’s auditing process of private clinics and found alarming gaps. Clinics were asked to show that their policies were in line with the law, yet important follow up like patient and staff investigations did not take place. These clinics still receive public funding for the insured services they provide, the public has a right to know how they are operating and who benefits.

A recent BC audit case shows why. In 2012 Cambie Surgery Centre was audited, and it was found that half a million dollars were charged to patients in 205 cases of extra billing, in only 30 days! This was on top of the $66,000 that was charged to BC’s Medical Services Plan in those 30 days.

Private medicine turns care into a retail product and physicians into sales people. It's the wrong cure for the problems our system faces.

The Parkland report also highlights an accountability gap where no penalties exist for doctors or clinics found to be violating the Canada Health Act.

A change in government should mean a change in how we deal with private clinics. We need our federal government to ensure the Act is upheld.

We need our federal government to ensure the Act is upheld. Provinces need to focus on public solutions to problems like wait times, and ultimately work to eliminate exclusive and expensive fee and profit driven clinics. Until then, proper monitoring of the CHA, as well as stronger regulations and auditing processes should ensure any clinic operating in Alberta does so with transparency and accountability.

Too many people fought for a Canada where people's health needs are met regardless of ability to pay to let these practices continue. We owe it to those who came before us and future generations to keep up that work, against those who would profit off our illness and let wealthy people pay to put the rest of us at the back of the line.

Friends of Medicare will be touring the province in 2018 to highlight the findings of these reports and to continue to call for responsible action from our Ministers of Health in Ottawa and Edmonton.