Council of the Federation 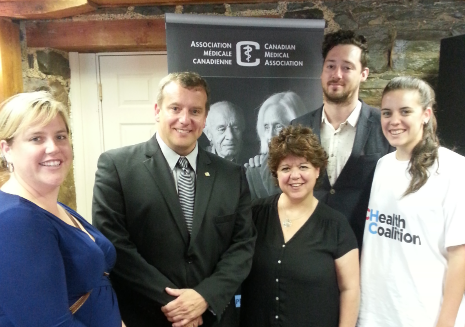 Friends of Medicare was represented this year at the Council of the Federation - the annual meeting of Premiers - by Executive Director, Sandra Azocar. In partnership with our friends in the Canadian Health Coalition, we continued to push on the need for federal leadership in healthcare, particularly around pharmacare and seniors' care. Traditionally, the Prime Minister attends the Council of the Federation, but Prime Minister Stephen Harper has not attended since 2009.

Despite the lack of a federal partner, the Premiers agreed with the call from the Canadian Doctors for Medicare on the need for a national pharmacare program. This represents a significant step forward on this crucial issue, and aligns the Premiers with Canadians, 91% of whom want a national drug plan.

Further, the Premiers are united in demanding the federal government contribute its fair share to healthcare, with an increase of 25% in the Canada Health Transfer payments.

Friends of Medicare participated in a number of sessions at the Council of the Federation, including a town hall meeting to promote and defend public healthcare, a forum on private-public partnerships (P3s), and two roundtable discussions.

Because of the federal government's failure to renegotiate the Canada Health Accord in 2014, and the abnegation of their responsibility to be an equitable partner in healthcare, our work continues to be essential. We are calling on the federal government to reinvest in our public healthcare system - a call validated by the recent Parliamentary Budget Officer's report, which insists that "permanent policy actions amounting to 1.4 per cent of GDP are required to put subnational government debt on a sustainable path."

We encourage Canadians in general, and Albertans in particular, to remember the importance of sustainable, equitable, and accessible public healthcare on October 19, 2015, when they cast their ballots.